Description: The building process generates piles of waste, which no one considers using in other buildings. The same is true when run-down buildings are demolished or dismantled. This was one of the experiments proposed in our design for MM House in Santa Cruz, Tenerife. Firstly, the staircase is suspended from the roof by tubes and metal sheet, retrieved from dismantled oil tanks, to which specially-made metal steps are soldered, and which are concreted in place using the remains of short steel bars left over from building work. Then, in the façade, we experiment with a system of slats constructed using galvanized water pipes and wood. The slats can be moved to control the entrance of sunlight and the views.

The building, set on a corner site, is separated from the party walls by a variable-section court, which provides ventilation and natural lighting without exterior interference to ensure optimum acoustic comfort. The brief is for commercial premises plus a garage on the ground floor, four apartments on two floors, separated diagonally, and a family flat with a terrace-garden at the top.

The construction of MM House took place during the adaptation of a CEPSA oil tank at the Arts Centre. At the same time, tank 69, adjacent to the one at the Arts Centre, was being dismantled and generating a great deal of waste. Fernando decided to reuse parts of the tank to build the stairway in his house.

Concrete was the material chosen for both the structure and the heavy part of the façade which, with its U-shape, seems to hold in place the lightweight timber and steel envelope.

Functionality comes first on the ground floor, not forgetting the importance of lighting and the materials that make entrance to the building a pleasant experience. Pedestrian entrance and the car park are located in the least busy street to ensure ease of access. The shops, conversely, open onto the other street and the corner, exploiting the largest expanse of shop windows. The separating wall adopts a curved form that facilitates vehicle manoeuvring. Likewise, the stairway is suspended over the space, floating, to free up space for cars.

The Reason for the Diagonal

The site of new construction, in the form of an outward-facing angle and delimited by the party wall to either side, gives rise to the organization of the two residential units on the typical floor plan according to the diagonal of the basic rectangle, making the most of the opening to the outside. The gap formed by separating the building from its party walls provides the apartment building with natural lighting and ventilation.

The only column in the house runs through the diagonal of the floor plan. Embedded in the façade on the ground floor, it frees up the maximum space inside the shop premises. On the upper floors, conversely, it gradually moves away from the façade to create, on the top floor, a large terrace, free of obstacles.

The process of constructing the stairway (salvaging parts of the CEPSA oil tank) began with the introduction of two steel tubes into the stairwell. These tubes were suspended from the roof terrace, subjected by a metal structure of large HEB profiles that rest on the concrete structural walls. As explained above, the stairway will float over the ground floor, freeing up space beneath it for a parking place. The two tubes are wrapped around by a metal sheet to which the steps are soldered, forming a spiral stairway. The formwork was made in the factory and then assembled and concreted on site.

The stairway will be lit and ventilated naturally via the variable-section gap created by drawing the building back from its party walls.

The building’s envelope consists of a system of vertical slats built of galvanized steel tube and timber. These slats can be adjusted to control solar radiation and vistas. The façade is manifested as a continuous timber backdrop that extends to the top of the building, concealing the setback penthouse and presenting a compact, unitary image. 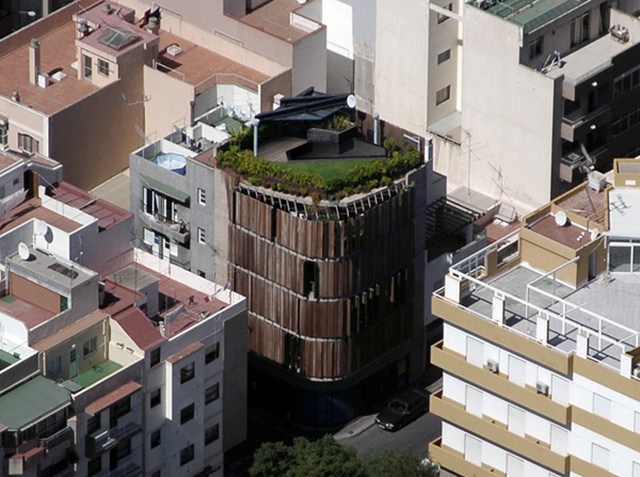 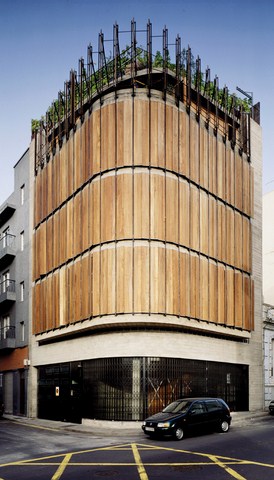 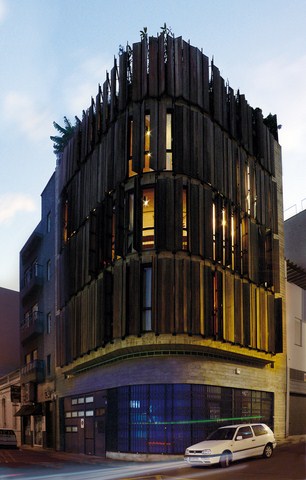 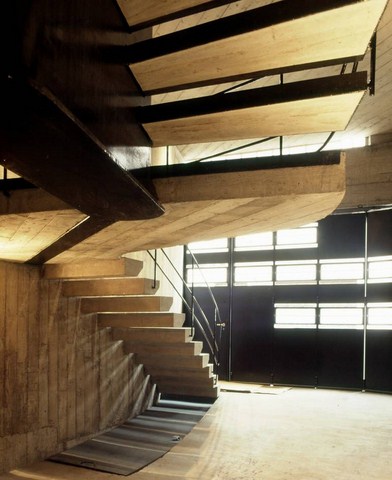 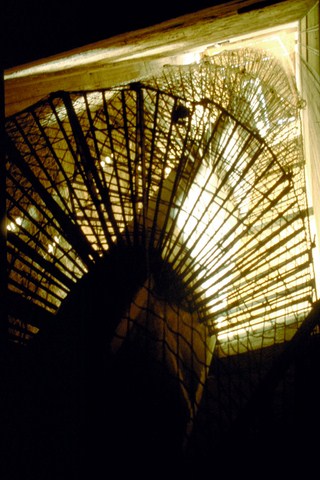 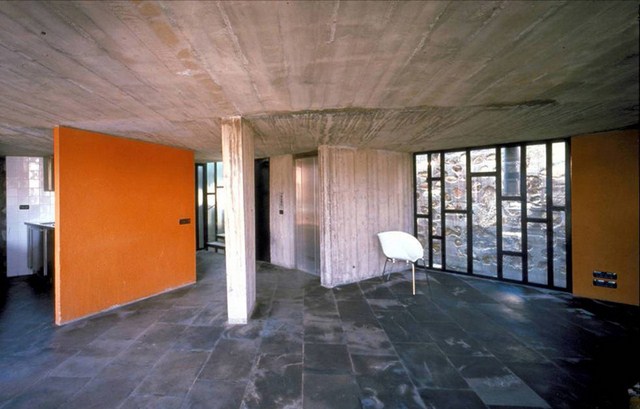 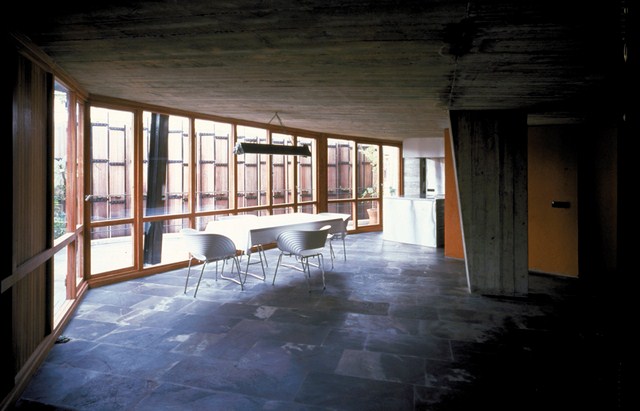 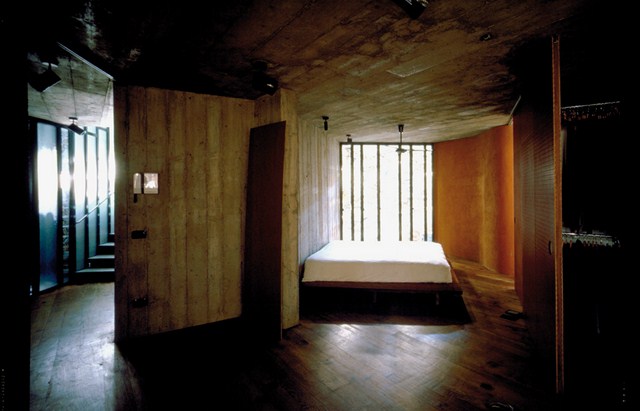 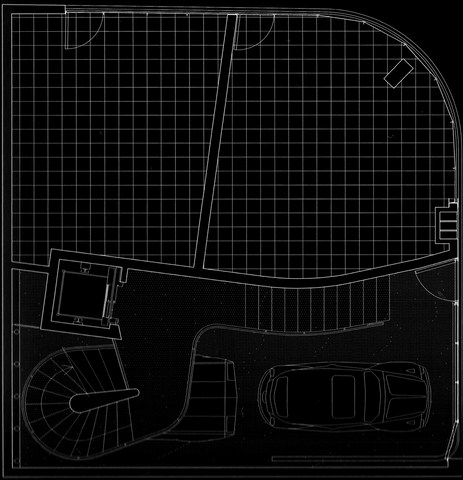 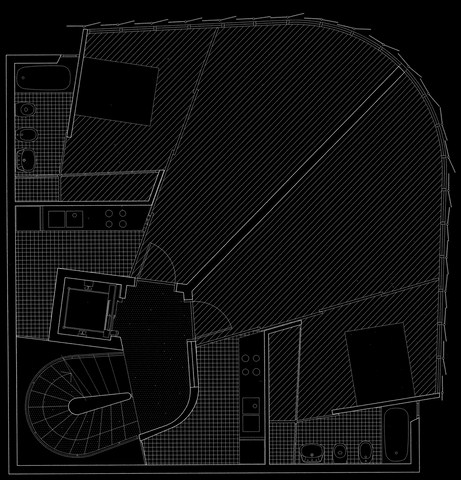 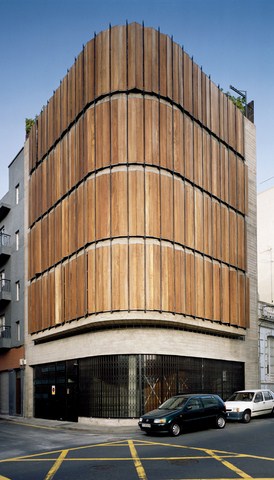