Description: The site stands on the boundary between various densely populated districts of Santa Cruz de Tenerife and is part of a series of leisure spaces that characterize this urban area.

We were faced since the beginning with the following conditions: the slopes of the original abrupt topography, with differences of almost 36m between the west and east limits; the distant views arising from here over the city of Santa Cruz and the Anaga peaks; the dominant winds blowing from the Northeast; the heavy aridity of the land; the disparity of the existing urban connections in its perimeter.

The layout of the resulting park is organic, “English garden” style, with free forms and winding paths, defining open and natural spaces, in search of sensory experiences. The free geometry of the network of paths adapts to the topography, defines shapes that recall the volcanic lava flowing down the slopes of the mountain and allows touring the park easily since it saves, with smooth slopes, the level differences between the park’s edges.

The main entrance gives an immediate comprehension of the three use zones: the meadow, the viewpoint and the paths (fragments of volcanic lava). The first zone, located in the western half, is defined by the large, circular esplanade covered with lawn as a meadow with a gentle ascending slope, which is framed and protected by a strong ascending slope, populated with tree mass, and connected with the access arranged at the west end, through the preexisting staircase. The second zone, located in the northern part of the east half, where the preexistent viewpoint is located, is organized in function of it, establishing two paths that partake the organic tours net of the park and which adjust the topography and greenery of the area. The viewpoint is surrounded with vegetation the height of which is controlled and whose function is sifting the force of the viewpoint imposed presence as well as acting as a protective barrier between the neighbors of the park and the visitors of the viewpoint, so as to avoid unwanted visual relations. The third zone, located in the southern part of the East half, is organized in function of the descending sequence of free and open forms, evocative of volcanic lava flows and it hosts specific uses such as playgrounds for children and leisure areas for adults and seniors.

The boundary with the urban fabric is set by a pedestrian path, which loses its sidewalk character, simplifying and enhancing the transition between the park and the city. This path, like the ones in the interior of the park, enlarges or withdraws according to circumstances and needs and softens the meeting points. In this way, the relationship of the park with the urban plot becomes friendlier; it seeks complicity and involvement with the social environment that inhabits it. The sidewalk actually becomes a linear plaza for the enjoyment of people who wish to walk through the area with an attenuated perception of the car traffic. This space that relates the urban plot to the park, is expanded as a four-point area that make up the four main entrances to the park: the one located at the east end, which connects to the roundabout, the opposite end, in the upper area to the west, which channels the residents flow of the district of Tristan, located in the north, and the one located in the south-east, which connects with the area of ​​sports facilities.

Parque Cuchillitos is a social park: it offers a set of six leisure spaces with specific uses ranging from the most intense to the quietest. There are playgrounds with swings, slides, etc. all of them designed by the author of the project, and homologated by the European Community; leisure areas for grown ups; a skateboard area which, as a sculpture, is embedded into the ground. And, on the other hand, the quieter areas designed for the elderly, with pétanque facility, a sitting space with a fountain, and an area where to rest.

Concerning the greenery, the preexisting trees were preserved and transplanted palm trees were recycled from other parts of the city, which were refurbished at the time.  The park was thought out as an evolution, so that as long as the vegetation did not grow, the park still had always something to offer to its visitors: aromas, colors and the vision of a park inspired by Kandinsky’s paintings.

The design of the vegetation, which is currently in its growth phase, reinforces the concept of a free, natural park. A green screen made of woody, high and intense green trees, shall surround the northwest edge of the meadow, and mark it with its sensibly circular shape while serving as a background for outdoor collective activities and events. The meadow was set on a gentle slope in the west-east direction, covered with a continuous lawn, alike the open areas in the landscape parks, very similar to the central space of the Central Park in New York.

The organization of the entire Park, from its lowest zone in the extreme East to the highest in the West, around the central meadow, is set up as if it was a comet, with its serpentine tails and permanently moving colored flames. The viewpoint emerges smoothly and becomes the head of the comet, from which fragments of the tails appear, with organic shapes reminiscent of the fire’s silhouette. In each of these dynamic spaces, native species of different colors in their flowering are planted, so that in the spring, there is an uninterrupted festival of aromas and colors. On the rocky beds that make up the terraces and the sides of the circular promontory and viewpoint, ravine low vegetation and fruit trees were planted and they are currently managing to coat the rocky accumulation, covering it with vegetation, as if it was on a mountain slope. The aromatic plants arranged inside the perimeter protection fence, when growing, will make it disappear integrating it in the “nature” of the park.

In short, Menis designed a natural park, with a strong landscape component, with a diversity of zones, aromas and colors, looking intensively for opportunities to offer a variety of sensations and activities. 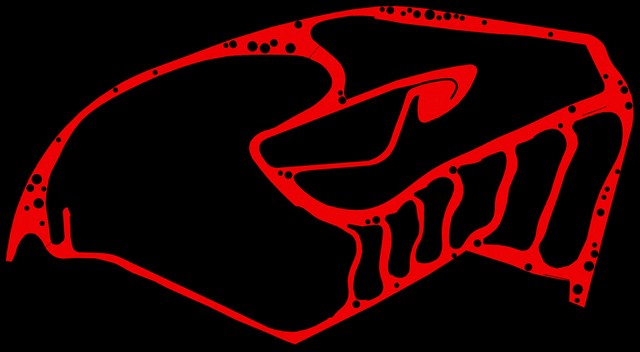 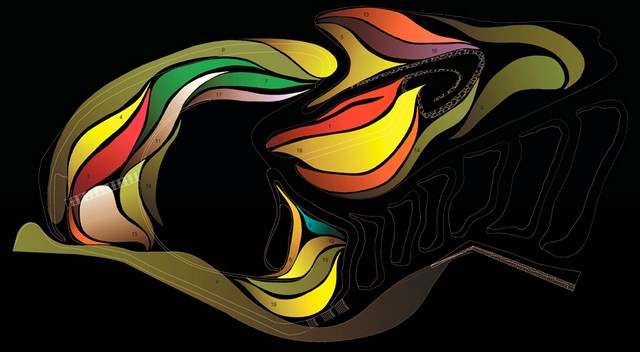 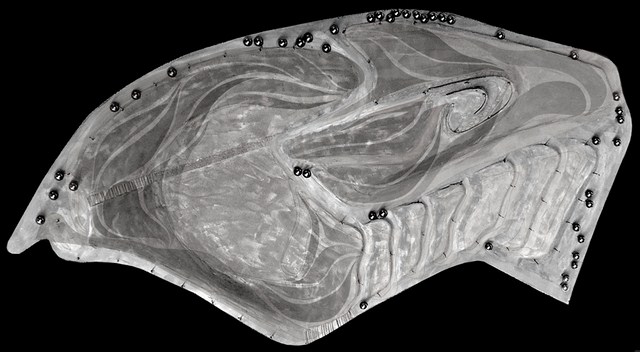 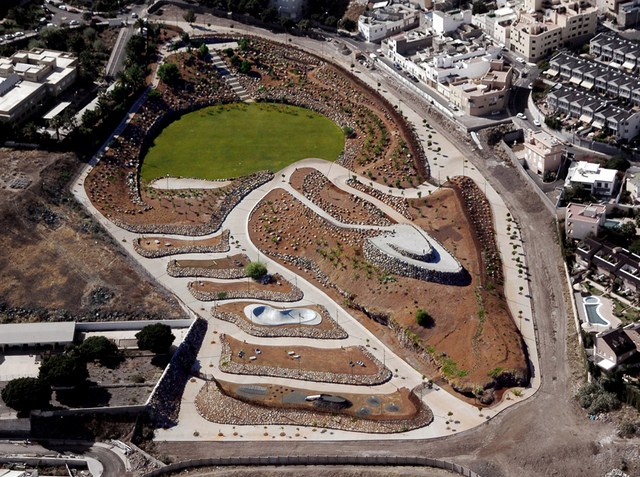 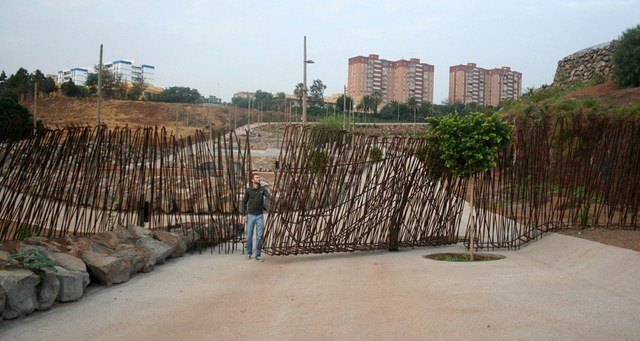 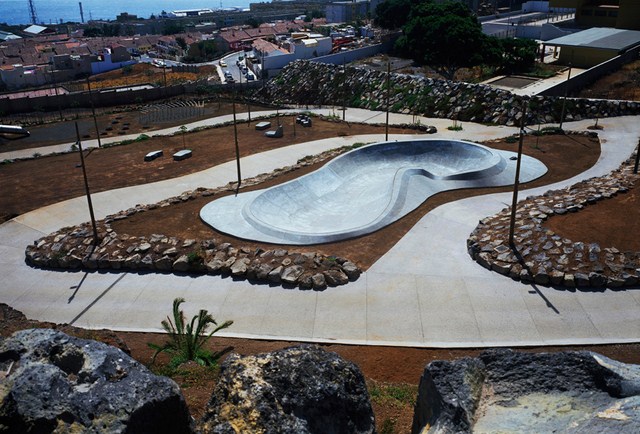 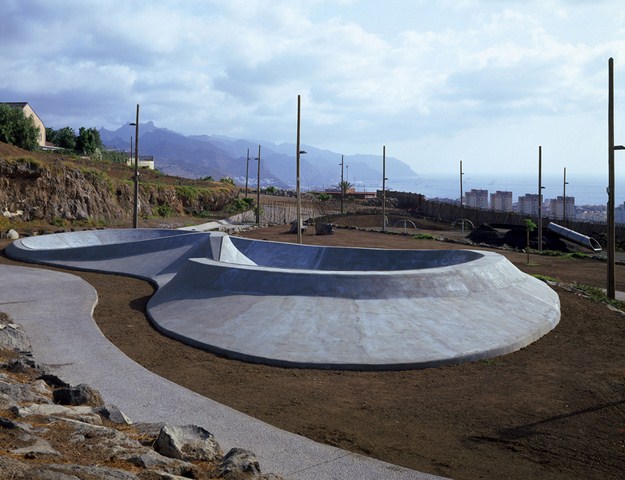 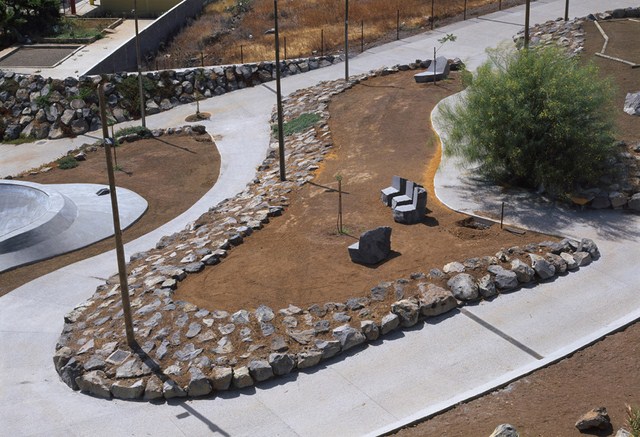 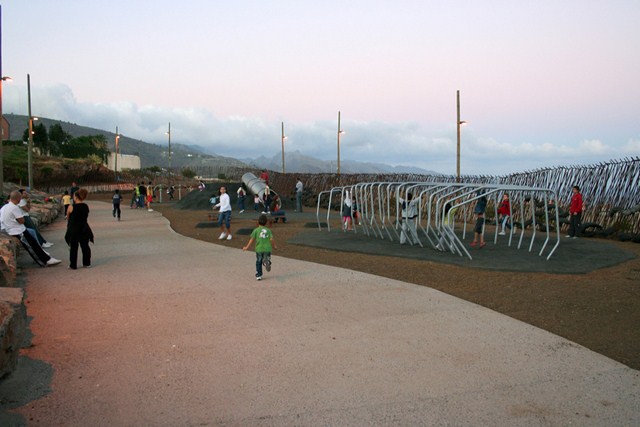 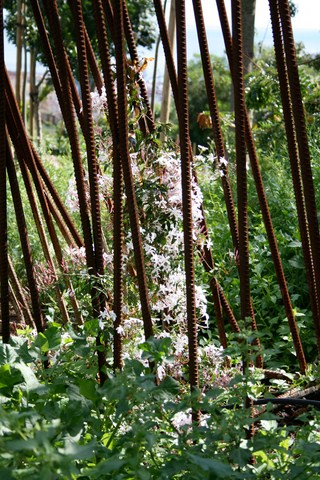