Main project idea: The city of Puerto de la Cruz, located on the northern part of the island of Tenerife with approximately 40,000 inhabitants, is one the first tourist cities in the 1960′ Canary Islands. It has always been an example in the history of tourism in the Canary Islands as a pioneer of tourism development; however, nowadays it is much more of a senior-oriented destination, suffering the consequences of time and in the need of a renewal to get back on track. Menis Arquitectos won the public call for tenders announced with this purpose in 2004 and has been working on developing the Waterfront project since then – still under discussion – which is partly based on a renovation and partly on a completely new establishment.

This project has generated great expectations among the citizens of the island, as well an intense and long social debate that has prompted many questions in the architect: how is it possible to combine the different interests that coexist in the place? How do we enhance the existing open commercial areas in Puerto de la Cruz at the same time as the development of new commercial zones? How do we respect the historic city and still leave a mark of the XXIst century?

Menis designs a new meeting point between the city and the sea, restoring the historical trace of the maritime edge of the city, returning the sea to its former coast line, rebuilding the vernacular landscape. The project takes the continuous and gradual growth of the historic structure of the city into account, bringing citizens to the sea in an organic and flexible way, incorporating the qualities of the place and including the recovery of a landscape consistent with the vernacular tradition of moulding the coast naturally for its use by man and the conviction of the importance of the public spaces quality.

The project responds to the character of the island of Tenerife and its northern landscapes, with rocky and volcanic maritime shores, small lagoons and black sand beaches, thus creating something new that enriches what already exists and brings the appropriate quality and modernization for a European tourism destination. It does not only maintain the original location of the coastline that favoured the close historical relationship between the sea and the city, but it also strengthens it by pacifying the sea – often rough in the north of the island – without having to create a dead lagoon and mastering therefore the natural Stream of the Atlantic Ocean, building a layer of water with a width that varies between 25 and 40m and creating two new coastlines in the city: one towards the Stream (overlooking the Teide) and another towards Puerto de la Cruz.

That double coastline is also of great economic value. The program is managed through landscape layers that are created, optimizing public spaces and giving them high values ​​of urban quality, while reducing, in each gesture, the impact that all this could have on the fragile historic layout of the city. These spaces link the historical values ​​and the current needs of Puerto de la Cruz with a smooth rotundity, eliminating all the unnecessary or aggressive elements of the urban landscape that currently exist in that place, from advertising billboards to redundant furniture, limiting the presence of cars and softening the mistakes of the past through vegetation. It is architecture of the essential that values ​​the physical and historical continuity of the city in its encounter with the sea.

Taking advantage of the future building of a nearby port, the complete regeneration of the entire coastline in the surroundings of the historical complex is proposed, which, together with a new multifunctional space parallel to that coastline, will achieve a large-scale urban regeneration. This gives continuity to the most important streets of this area of the city, as Mequinez Street, which will once again reach the edge of the water. The biological and scientific explanation of how the Stream works will also be an added attraction that could be of interest to tourists.

Behind this layer of water and parallel to it, multipurpose buildings have been designed to transform Puerto de La Cruz into a whole new public area to offer leisure and economic activities. The program of this ensemble is more than a simple mix of functions: the main aim is to achieve a real organic connection between the old city network and the harbour. The ensemble will include: squares, public walks, a shopping centre, a sailing and nautical sports school, a beach-club, gardens, a parking lot, a 360º viewpoint, restaurants, an open-air auditorium and gastronomic markets.

Menis’s design includes a new beach as an extension of the Playa Jardín designed by César Manrique in 1992. With a series of design features that differentiates it from any other existing beaches on the island: it is a privileged natural viewpoint over the spectacular volcano Teide. Furthermore, since it is oriented towards the south, its users will be protected from the cold Trade Winds and the big waves. Swimming will be possible and easy throughout the whole year. The new harbour dam will act as a “support” to the beach, making it a sustainable and low cost construction, keeping the local black sand in place in a quite natural way. There will also be a layer of vegetation that integrates trees and solar energy lampposts between the beach and the city. 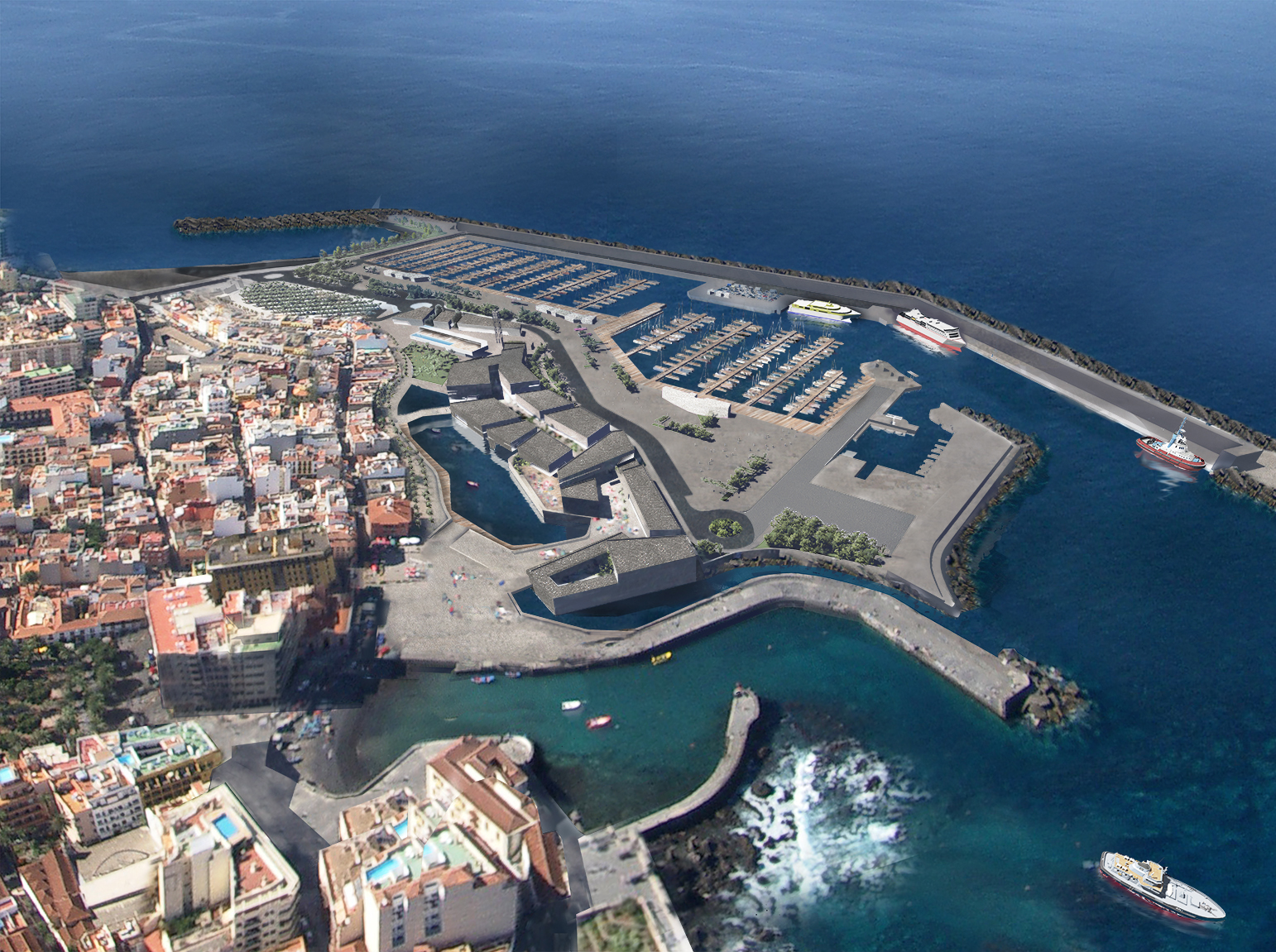 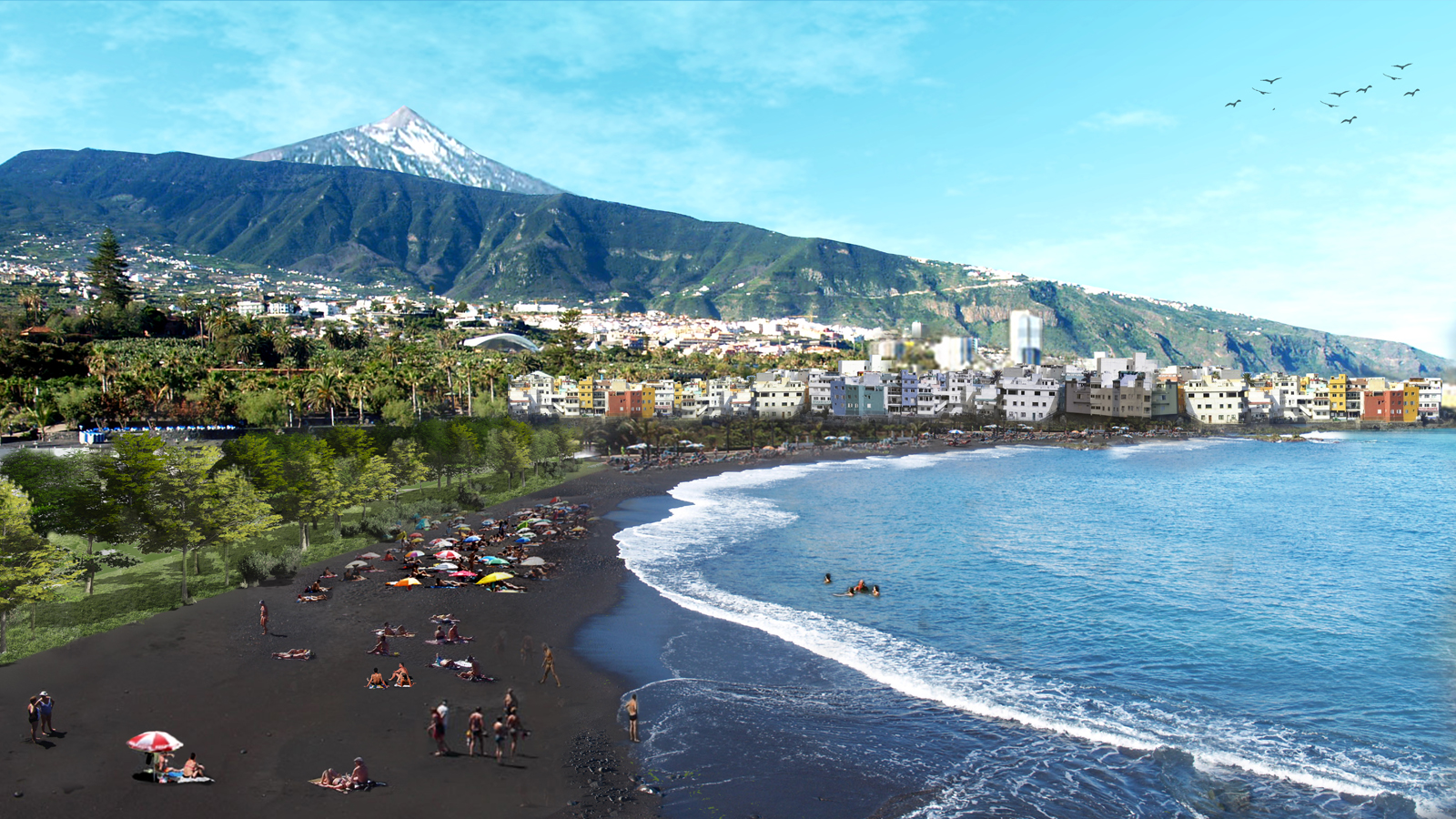 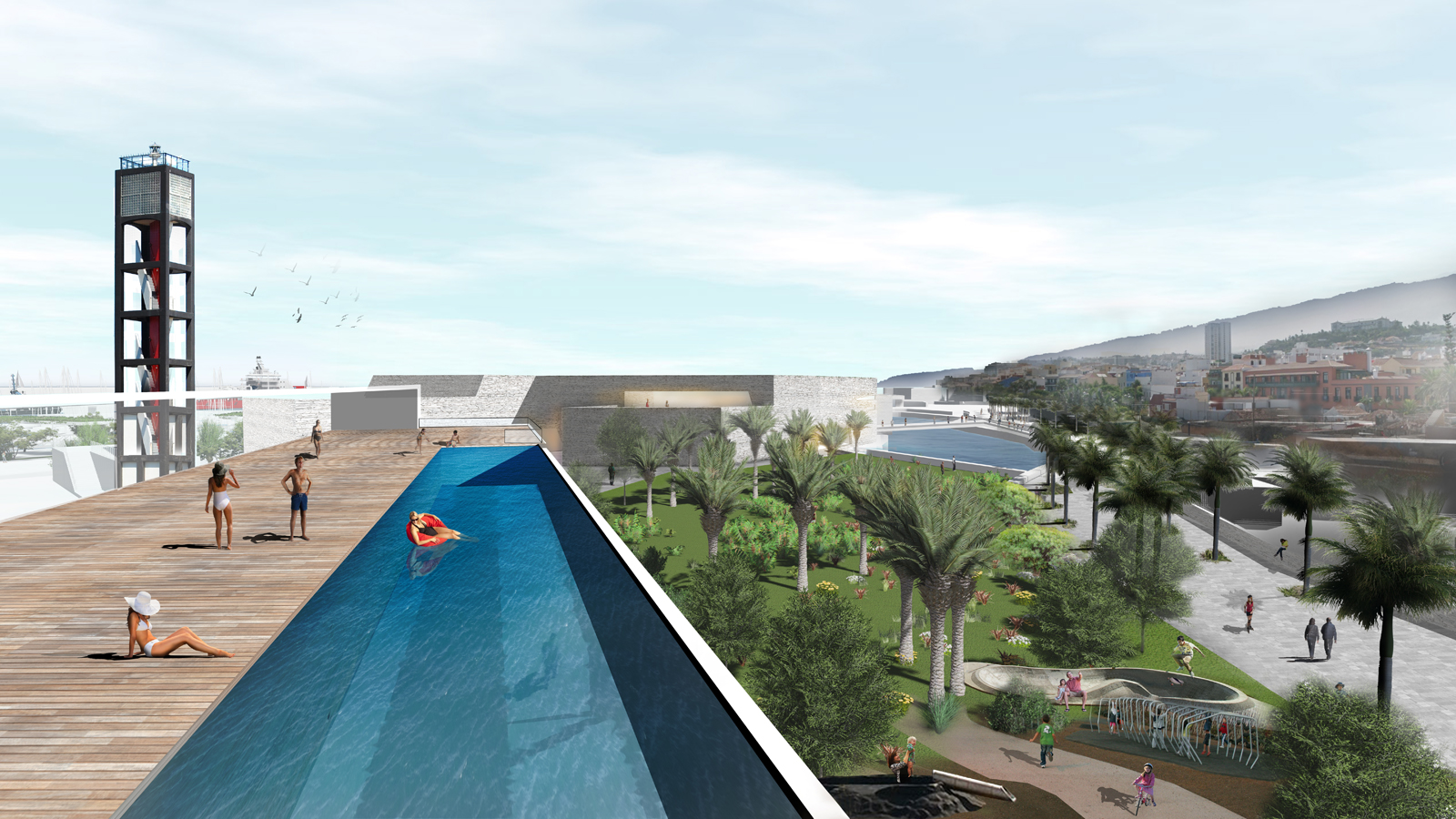 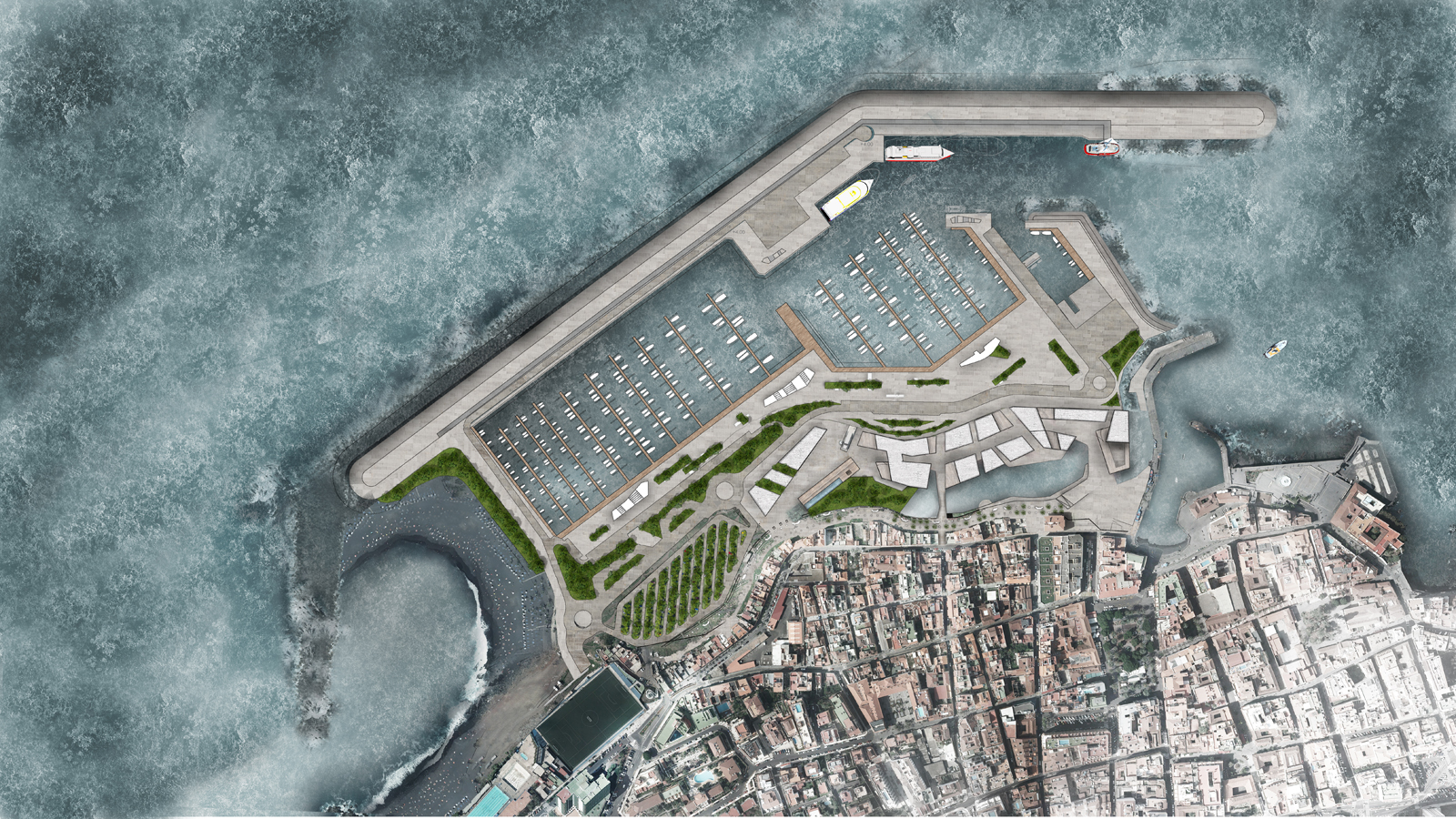 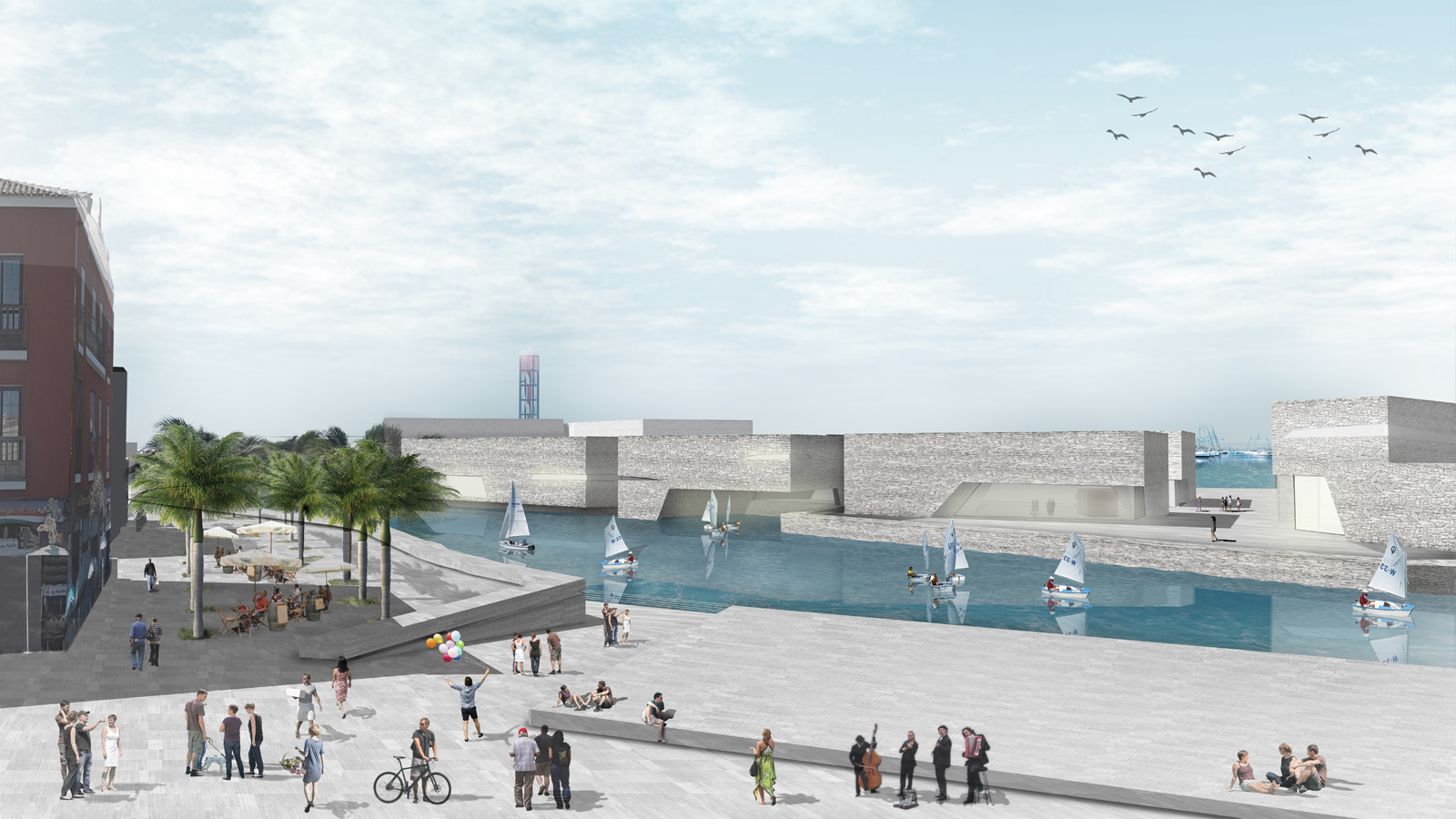