Bürchen Square in the Swiss Alps

Description: The lack of economic activity as well as unemployment are the main reasons for abandoning villages, whether in Spain, in Switzerland and probably in any other place in the world. To prevent its disappearance, Bürchen, a village of 750 inhabitants, located in the Swiss Alps, decided to seek a strategy for its economic recovery. To this end, in 2013, the City Council launched an international competition that sought to select an economical conversion strategy which would allow the winter ski tourism could be completed with a summer offer, based on nature tourism. Menis got the assignment after beating Diller & Scofidio + Renfro from New York and Coop Himmelblau from Austria, with an entry entitled “Bürchen Mystik”.

Part of the project, the Public Square, was completed in 2015 and the next stages are now in progress.

Menis proposes the challenge of rethinking and reconsidering a place for the foreseeable future, a tourist space, which is very local at the same time and framed by its breathtaking nature. The design focused on experimenting, investigating, innovating, thinking backwards, trying to understand what the tourists of the future may be and look for and trying to find solutions that could make of Bürchen Mystik a place with charisma.

The research was exciting, while launching questions and seeking for answers: How will future tourists be? What will they look for? What do we want Bürchen Mystik to be? What is the world in which we want to live in like? We may look for something authentic, in direct relation with nature, something to recall a sacred place and atmosphere, with natural textures, something that may be linked with the origins of humanity, with the origins of society, of community, with spirituality, something that may be like a return to our childhood happiness and innocence, the summit of spring, of fall, winter or summer.  We may look for the brightness of life; we may simply aspire to living without haste, carpe diem.

For this project, more than ever, Menis worked with mixing different disciplines and professionals, in order to find inspiration, the genius loci of Bürchen and adequate solutions: philosophy, ethics, art and music, architecture and innovative touristic marketing. To properly analyze the situation first we tried to know about the differences between summer and winter, to understand how spirituality is perceived in Bürchen and how we understand it nowadays.  We discussed the importance of cultural heritage, cultural tourism and leisure, the importance of nature and above all, we considered the importance of living in a community, so that each of us feel free. We have analyzed the area and similar touristic zones in the vicinity in order to be able to deliver an alternative offer to what already exists. We researched ideas about the tourist of tomorrow: the tourist is increasingly free, the tourism industry changes and underestimates the importance of intermediation and it grants this importance to the reputation of each place, to the emotions and the experiences it provides. Tourism is acquiring a much more free spirit thanks to communication technologies and the free flow of information. Tourists not only discover new places, but who also look for new emotions, feelings and experiences.

Menis proposed a new infrastructure that would accommodate the greatest possible number of activities, providing special emphasis to the landscape as well as architecture (the new landscape it creates) and to the other many activities additional to the existing that can occur in Bürchen, especially in the reformulation of the meadow, which gently slopes in front the Bietschhorn hill, through a continuous green plan in the summer and covered by snow during the winter.

The access sequence from bottom to top of the town, tells a story, the story of the place, which is presented in a “processional”, mystic manner like in the Treasury of Atreus (2,400 ac), but in this case, the experience occurs outdoor. The access is sometimes narrowed and compressed by the effect of the volumes, so that after having walked through part of it, the exterior promenade is decompressed when meeting the mighty nature and occasionally creating, in the interior or spaces in-between buildings, vertical spaces lit from above in the same manner as the civic spaces typical of Roman architecture such as the Pantheon (118 AD).

The design draws a path full of attracting elements and connectors, such as a market, culture connects once again with tourism: a market like the San Miguel Market in Madrid, but without an uniform roof covering all the old barns. Instead, these will be connected y a base with the intention that each barn will maintain its spirit and character and so that each one of them will function as a specialized space, receiving technical assistance from below. Besides the market there is a hotel that looks like a forest, because it is fully integrated into the landscape, it is n “the inhabited forest”, the temple of water and meditation and a public plaza linking the two parts of the village, already completed, since 2015.

The project presented by Menis, responds to a complex trace, clearly fragmented into specific functions, and dynamism, where discontinuity, twists, trapezoid forms which are sequenced and moved in relation to each other in a rhythmic tension, as if they were a music piece, are the most important features that differentiate it in the viewers eye: an interesting game of solids and voids, a mixture between civilization and nature.

The slight transformation of the existing topography, which mainly resulted from the energy that arises from the natural environment itself, becomes the origin of the design intentions of the project.  This force that comes from the outside, from the natural landscape but also from the interior of nature, is also closely linked to the territory in which it is found and it comes from its Genius Loci, is the landscape itself the elements that shows us the way to intervene.  Our vision is this:  the landscape must guide us.

Giving shape to the territory based on the interpretation of its natural forces, the project awakens a surprising spatial experience in the visitor, taking into account that it consists of an unexpected architecture, where the visitor doesn’t perceive an exterior volumetric image of the building but rather will gradually discover the spaces as he/she wanders through them.  In these spaces a mutual influence between the landscape and the project exists, accentuated by the rising of the building over the surroundings, or, on the contrary, by the fact of going in depth into it, without disturbing the natural framework or the views of the neighbours.

Traditionally, Bürchen’s economy was based on something that is currently banned – the construction of second homes – made with wood, processed at the local sawmill. For the sawmill, this law change led to a serious crisis. Menis’s design takes this crisis as an opportunity, giving the wood a leading role in the design of the plaza: the benches become a showcase for the technical possibilities of wood, reinterpreting traditional geometries and the plastic qualities of wood to create a new type of sustainable urban furniture which can be extrapolated to other places. The small square is conceived as a multipurpose space, with benches that work an amphitheatre and its design outcome has been collectively discussed and decided by the village community. The geometry of each bank recalls the steep topography of the place and the lighting saves energy through an interactive game with passersby, lights varying from flashing in winter to soft in summer.

The next stage of the project, currently under development, is the hotel. Its design gives special prominence to the landscape, a brand style of Fernando Menis’s work. It reformulates the meadow, gently sloping, facing Mount Bietschjorn, by a continuous plane, green in summer and snow covered in winter. As required by the Swiss democratic tradition, the design process incorporated opinions collected from Bürchen’s public bodies and citizens who were all called for discussing the project.  New leisure areas, which would increase the tourism potential of the city, were added, according to the inhabitants’ suggestions and without forgetting the history of the village. Thus, although the hotel is a private investment, its design can be judged as “public”, since the City Council argued this infrastructure should change the future of the village while keeping its environment harmony. The hotel proposes to create magical rooms that allow stargazing, as well as spaces for reflection and meditation.

The entire series of new buildings is bathed in light from the skylights, which are able to introduce the viewer in “the transcendent power of architecture” (Cristian Norberg Schoultz). Light plays a decisive role, in the understanding and perception of these spaces, which have been conceived full of symbolism and spirituality.

There are numerous planes of surrounding light arranged in different areas of the hotel which introduce the customer, throughout the day in a symbolic world, so that the first light of day, symbolizes the first light, life, the beginning; as the day goes on, the light coming from above, materializes as the penetrating rays that illuminate some spaces first and others later, symbolizing the change and at the same time the tranquillity of nature, always in immutable evolution.

The darkness takes us to solitude in some spaces during the night; it brings us to spiritual peace, while the light represents the energy of life. This way, when entering into specific parts of the hotel and in the temple of water, one can experience that sensation of the transition from darkness to light, from solitude to society, from the experience of oneself as a human being to living in comfort in the company of others. The hotel has spaces thought of for the encounter between visitors and the community of the place. Especially playing with colour, light and the sounds of air and nature, it is possible to promote Bürchen Mystik in a different manner. Simply by changing the light sometimes complete transformation can be achieved.

With power in every piece of architecture, with the expressive power, the consistency, coherence and quality of symbolic spaces provided, a masterly use of light can be performed learning from the resources of timeless architecture, like in the Christian, Byzantine, Gothic, Renaissance and especially Baroque buildings, where light was one of the most precious materials for the construction of architectural space. With vertical light focused from the top to the ground, like it was always done in timeless architecture, Menis will achieve a building that would also be a piece of art, a unique and singular work, of high formal, material and spatial quality. 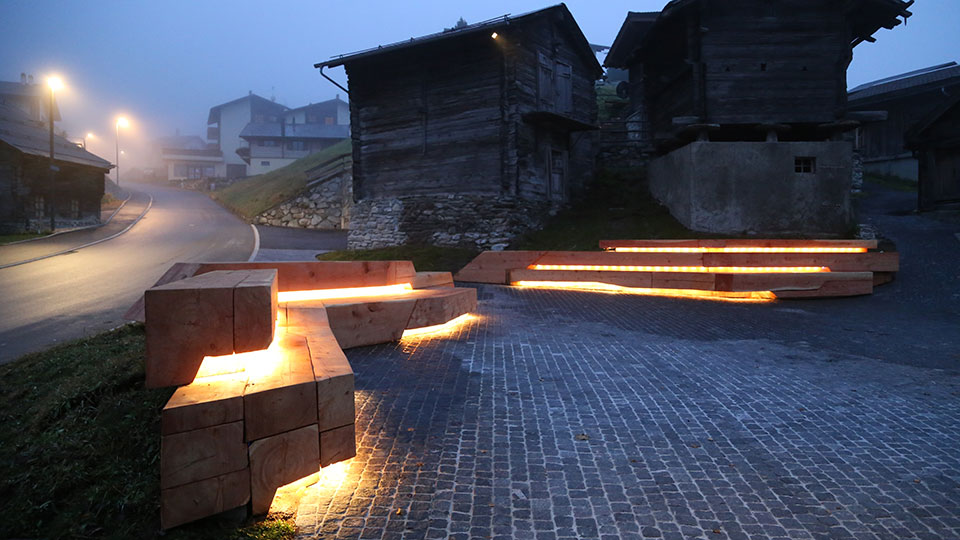 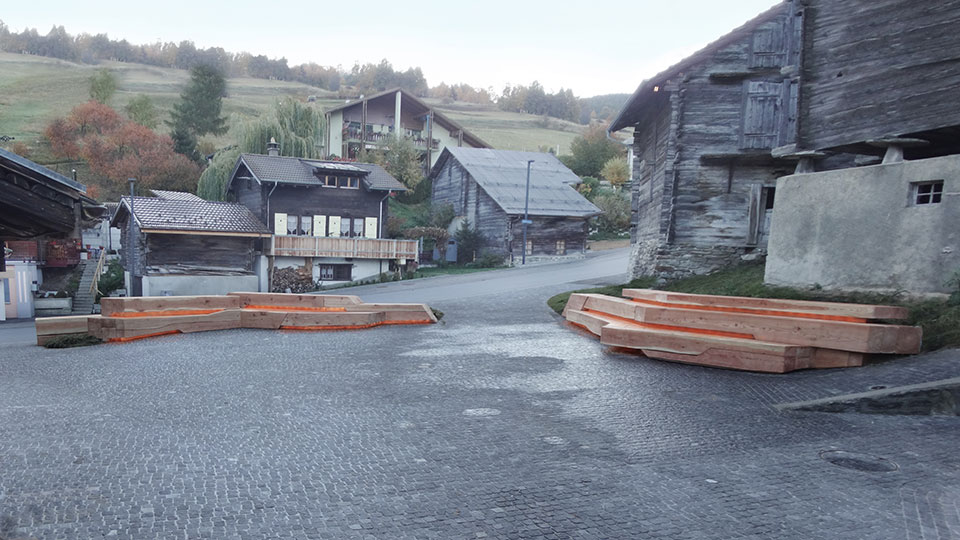 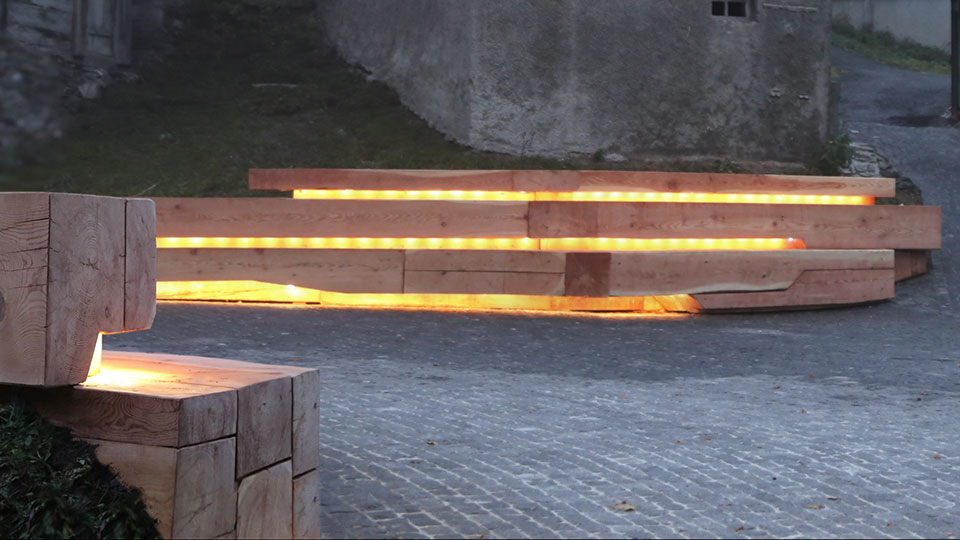 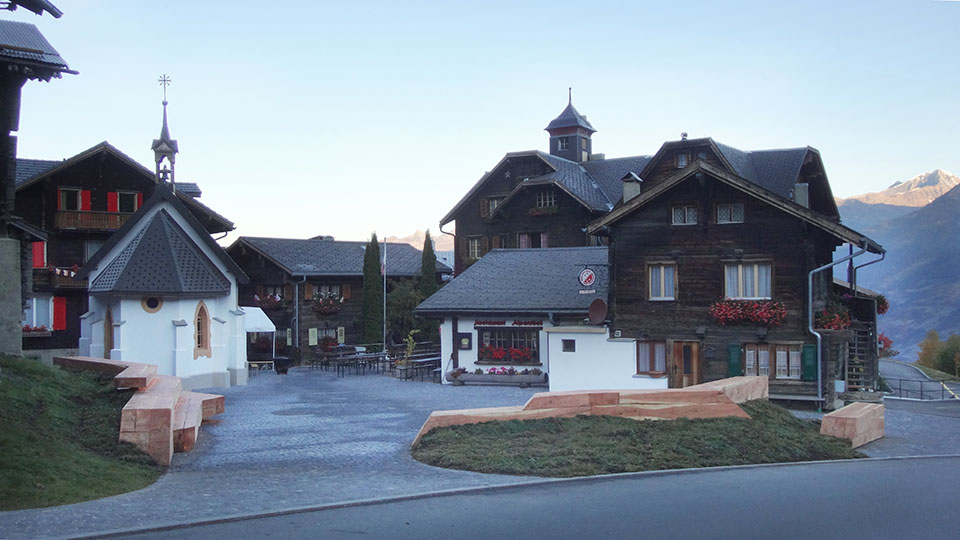 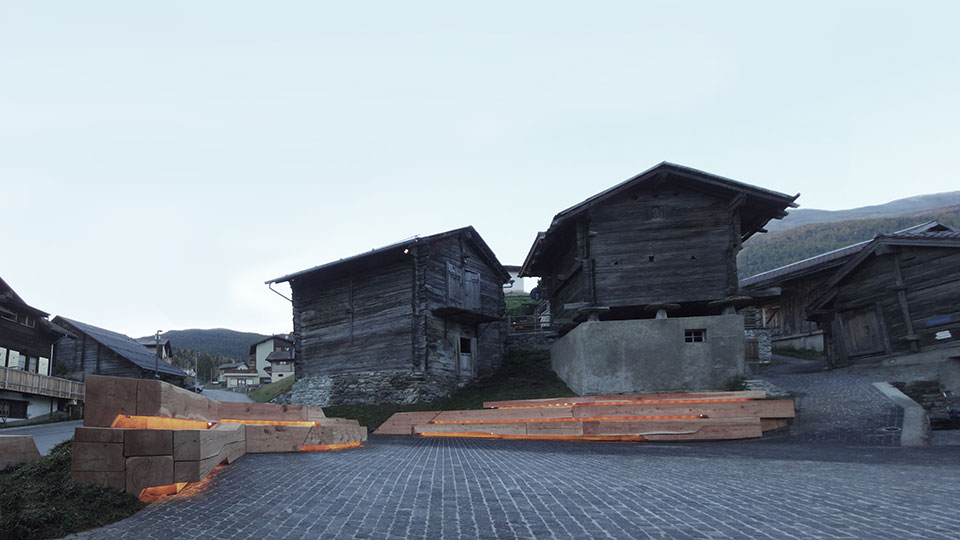 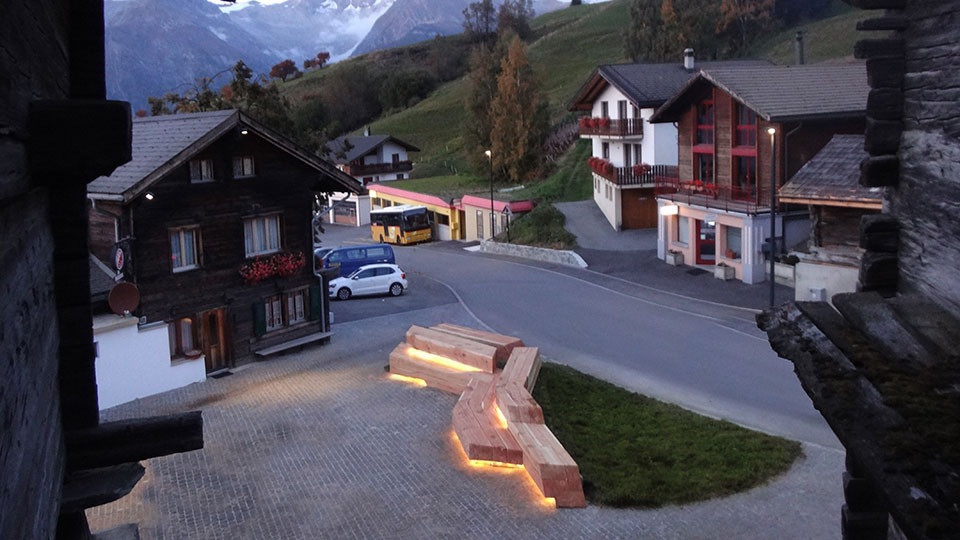 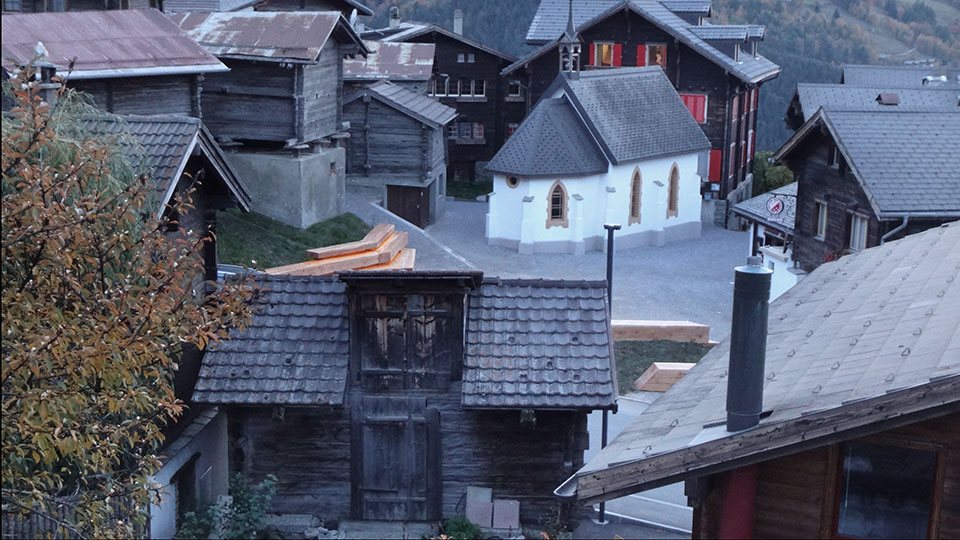 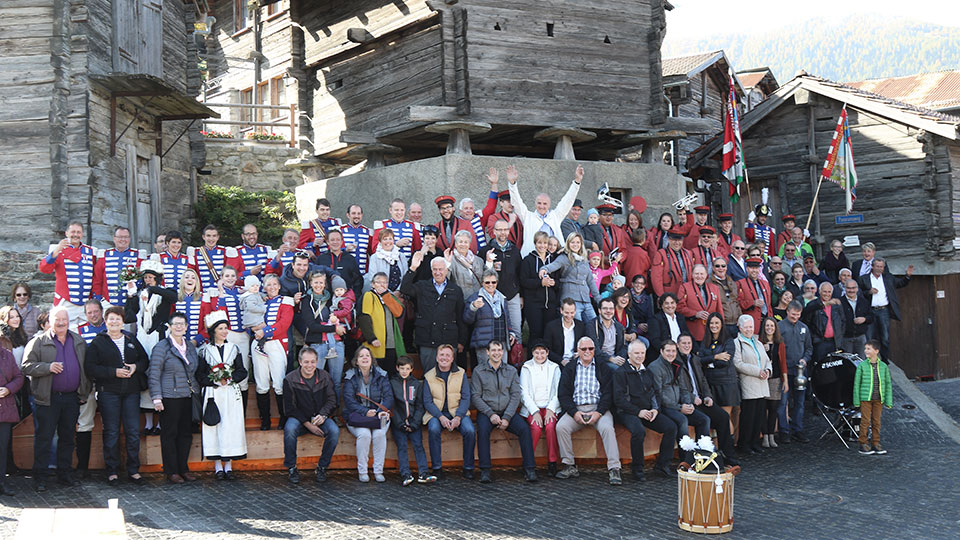